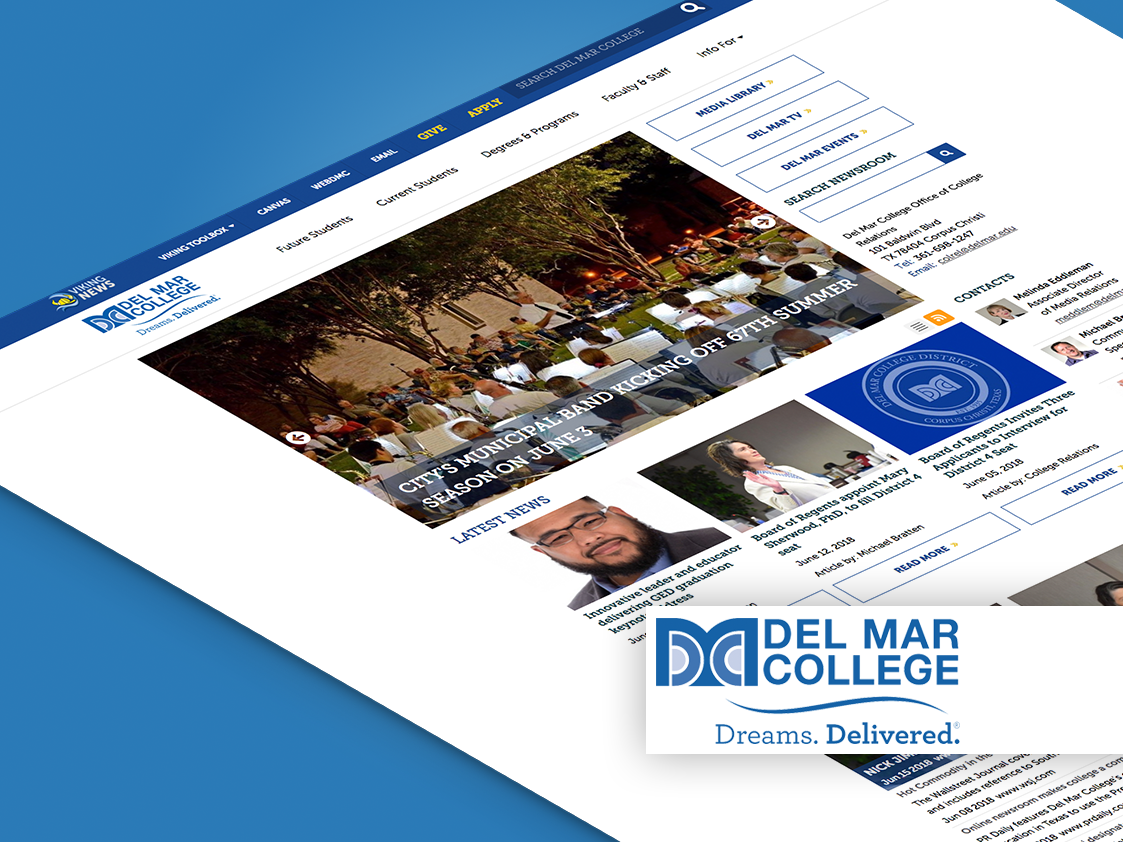 With newspapers and TV stations shrinking their staffs these days, how does an organization get attention for its events and accomplishments?

And if there’s ever an emergency such as a hurricane or—God forbid—a gunman on campus, how do you get the news out on all your digital channels immediately?

These are some of the questions that led officials at Del Mar College in Corpus Christi, Texas, to launch an online newsroom through PressPage. Del Mar College is the first higher education institution to subscribe to PressPage in Texas.

“News media has changed. Even with our local metropolitan paper, staffing has been downsized considerably. There’s not as much placement, even in terms of educational reporting.

Del Mar has 12,000 students, making it as large as a mid-size university. That means it’s a hub of academic activity as well as a resource for a community that is both a tourist attraction and center of industry on the Gulf Coast, Eddleman says.

The college has been featured in important news stories, and Del Mar officials naturally wish to trumpet the news. PressPage is a cloud-based newsroom that allows easy posting by communications professionals. The software also enables users to post readily to social media, extending the reach of Viking News, as Del Mar’s site is called.

“It’s a great hub to get things out,” Eddleman says.

Since the site went up late last year, it has received more than 8,800 visits. PressPage has provided in-depth statistics to the college compared with what was previously available, such as new and repeat visitors.

Eddleman says, “I feel these numbers are very impressive, since our Viking Newsroom has been live for less than six months.”

Tropical storms pose a significant threat along the Gulf of Mexico. Hurricane Harvey hit about 15 miles north of the college. In such an emergency, the college can change the number of stories rotating in the carousel.

Another advantage of the platform is that it makes it easy to upload stories, photos and video, and to attach captions to visual assets. This allows the college to make its content compliant with the Americans with Disabilities Act; a blind person scanning the site with a special device would know what photos are posted. Also, the college’s Del Mar TV provides closed captioning, a capability that didn’t exist before it used PressPage, Eddleman says.

The school produces a wide range of content. There’s a video on the sound recording technology program’s final recording for spring semester, as well as an article on spring commencement.

Under the heading “Latest News,” it touts its industry partners and highlights their support of the college, Eddleman says. Stories mention a $100,000 donation to the Safety Institute and a $54,000 scholarship award for 17 process technology majors, a department that also received a $1 million gift.

The front page has an “In the Media” section that enables the college to note stories about its programs or where its staff are quoted. Quick Takes enables users to post notable matters they wouldn’t pitch to news outlets, due to lack of local column space or airtime.

Eddleman’s team has four people, part of a college relations office of 15. She believes PressPage would work just as well for small, rural colleges where communicators often have dual roles.

Yet if they can drive their community to their newsroom, this could very definitely become an informational hub for the great news and opportunities that individuals can access.

Even in Corpus Christi, the site has become a resource for the community at large, as well as those interested in the college.

“You might have Mom and Dad researching, or a potential student researching your institution,” Eddleman says, “and they come across the news and—‘Oh, OK’—they see all the different things that we do.”

Enjoy the pride of proactive storytelling

The aviation industry has a major impact on the world we live in. It brings people, cultures and businesses together. It generates economic growth and facilitates trade and tourism. Alongside all the good, aviation has been going through some …
Read more

Take control of the conversation with Media Inquiries

Organizing and managing your media inquiries is a huge task that requires streamlining. Trawling through emails, post-it notes, spreadsheets to respond to individual questions and requests from journalists is impractical. In the worst cases, it can …
Read more

dirico and Presspage announce their partnership which offers communications teams a holistic approach to story creation and sharing by uniting the key tasks of planning, creating, publishing, and distributing content.
Read more
About PressPage

Enjoy the pride of proactive storytelling
Take control of the conversation with Media Inquiries
Presspage - dirico partnership to streamline external corp comms workflow
Sizeable challenges: ensuring your communications work at scale
Why choose Presspage over a home-grown workflow?
What could you do with 30 more hours each week?
Register now for our newsletter opens in new window
BT - Presspage