University's digital newsroom an oasis in 'a media desert'

Governors State University in south suburban Chicago long languished with little interest from journalists. A new content strategy and its PressPage platform are changing that. 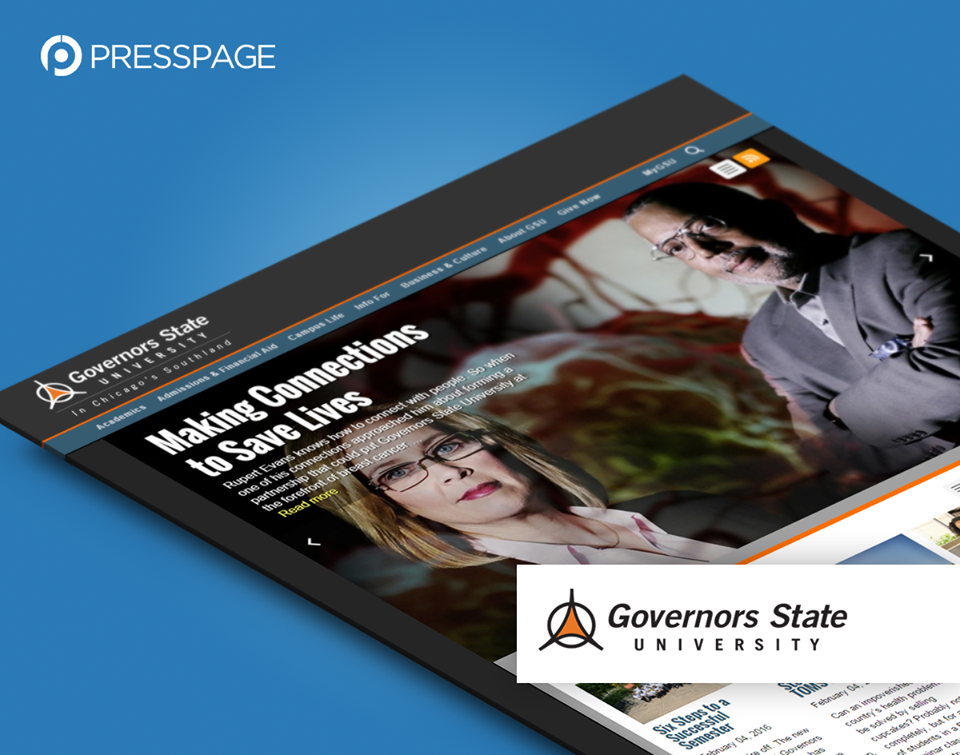 Governors State
Founded in 1969, Governors State University GSU is a four-year public university in the state of Illinois that champions openness, innovation and flexibility. Serving more than 5,500 students, GSU offers 64 degree and 24 certificate programs and their students earn the qualifications needed to succeed in business, industry, healthcare, the arts and education. Their PressPage newsroom will keep its audiences up to date of all their news. http://gsunews.govst.edu/

If you handle PR for an organization of any size, you probably know the feeling: You have a dynamic story to tell, but little to no luck in interesting the press. The problem is compounded at Governors State University, a south suburban Chicago institution whose 5,500-student enrollment might attract journalists in most other markets. Sitting 40 miles outside of major urban area filled with colleges, however, Governor's State tends to get overlooked by TV camera crews and newspaper reporters seeking a story.

"We're in a really weird location in terms of media market," says Keisha Dyson, assistant vice president of marketing and communications. "We're actually in a media desert, and we have very limited resources. We have a very small staff." This year, Governors State is seeing results from a new content strategy with the launch of its new digital newsroom. The site is run on PressPage software, which eases posting and social media sharing. "Before, we didn't have anything," Dyson says. "We did not have a newsroom. This is baseline data for us, which is why we're thrilled, because before we were getting no attention."

I feel like we're spinning gold out of hay.

Take, for example, a student rally in March in a state beset by a budget impasse. Until 2015, the university didn't even use social media, and its main channel to spread the word was an e-newsletter, says Dyson, the author of the new content strategy. In January, however, Governors State launched its digital newsroom, so there was a platform where it could give the story some legs.

It wasn't an easy task. Students at colleges much closer to the urban center were also hosting rallies. Governors State's two-person comms team drove its own story by posting a graduate student's article on its platform and notifying reporters with whom the college had built a relationship.

"Similar to your civic duty to vote, you should consider this your civic duty as a student at GSU," Matt Gentry wrote. "The gravity of the budget crisis for GSU is hard to understate, and the ramifications are especially real for those that expect to graduate after May 2017."

The rally ended up being covered in the Chicago Tribune, WGN-TV, the Daily Southtown newspaper, and local affiliates for all three major broadcast networks. (The newsroom followed with a story on a rally its students attended in Springfield, the state capital.)

A newsroom story on how Canada geese were nesting at the university also took off in local newspapers and on TV news broadcasts. Maybe statements such as this helped drive interest: "When geese feel threatened, they will typically charge humans from behind striking them with their wing or beak."

"We got insane coverage of our geese, and that was the result of PressPage," Dyson says. "We put what was considered an internal story up on PressPage and it became a regional news sensation." For a communications shop that didn't have any previous data to benchmark itself against, this was all rather exciting.

'Own our own stories'

"We believe we should own our own stories," Dyson says. "We believe that from this office, we tell the very best stories that are coming out of our university."

"I can't say that we've convinced [journalists] to tell the story we want them to tell," Dyson says. "What I can say is that we owned our own story and we've told our own story. And in some instances, we've had members of the Chicago media retweet our stories."

Another story that PressPage turned into a hit was an announcement that its board was freezing tuition, despite the uncertainty of state finances. That won coast-to-coast coverage, from San Francisco to Washington.

"That story got picked up by the Associated Press, and it spread like wildfire," Dyson says. "That's a great example of something that would have been traditionally ignored." 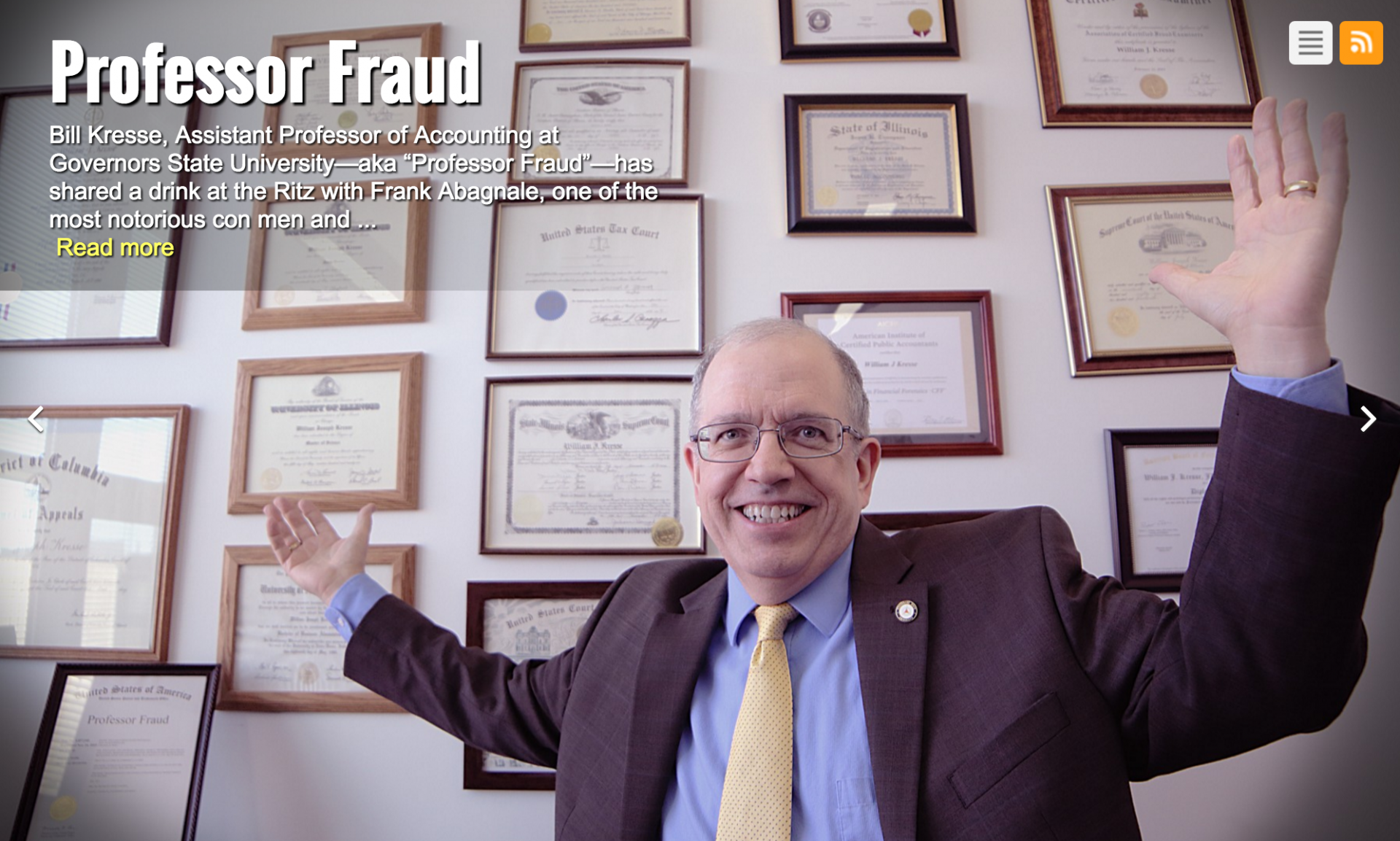 Professor Fraud: Governor's State Newsroom
Founded in 1969, Governors State University GSU is a four-year public university in the state of Illinois that champions openness, innovation and flexibility. Serving more than 5,500 students, GSU offers 64 degree and 24 certificate programs and their students earn the qualifications needed to succeed in business, industry, healthcare, the arts and education. Their PressPage newsroom will keep its audiences up to date of all their news. http://gsunews.govst.edu/

The platform allows the university to highlight interesting experts. A faculty interview just posted features Bill Kresse, assistant professor of accounting, who goes by the name Professor Fraud and has been featured everywhere from The Washington Post to PBS.

The prof, who harbors a fascination for shysters, "has shared a drink at the Ritz with Frank Abagnale, one of the most notorious con men and impostors of the late 20th century," the university reports. "He's rubbed elbows with Frank Sinatra, and he was mentored and befriended by Judge Abraham Lincoln Marovitz, the only federal judge to sit on the bench without going to college.

"Fraud creates this continuous battle of wits between those who are trying to separate us from our money and those of us who are trying to prevent them from doing that," Kresse says. "So it's a marvelous puzzle that keeps changing and manipulating, and it really gets the imagination sparked."

PressPage has also enabled the communications team to begin measuring the success of the stories and adjusting coverage of the campus accordingly. "We're using SEO strategy to expand our storytelling," says Dyson.

This article was written by Russell Working and originally published on Ragan.com on April 29, 2016

A few years ago, National Joint Powers Alliance (NJPA), a government agency centered around serving the community, arrived at the conclusion they had outgrown their brand name. Setting out to rebrand their organization, they left behind NJPA and …
Read more

Bupa is a unique organisation with a strong purpose: Longer, healthier, happier lives. It has no shareholders and instead reinvests its profits to deliver more and better healthcare for its current and future customers.
Read more

Pirelli is one of the largest tyre manufacturers in the world. Their innovative and sustainable products are made in 19 factories across the world and supply a world class product for cars, motorcycles, and bicycles.
Read more
About PressPage

University's digital newsroom an oasis in 'a media desert'